Supreme Dutch in all the newspapers in Holland!!! 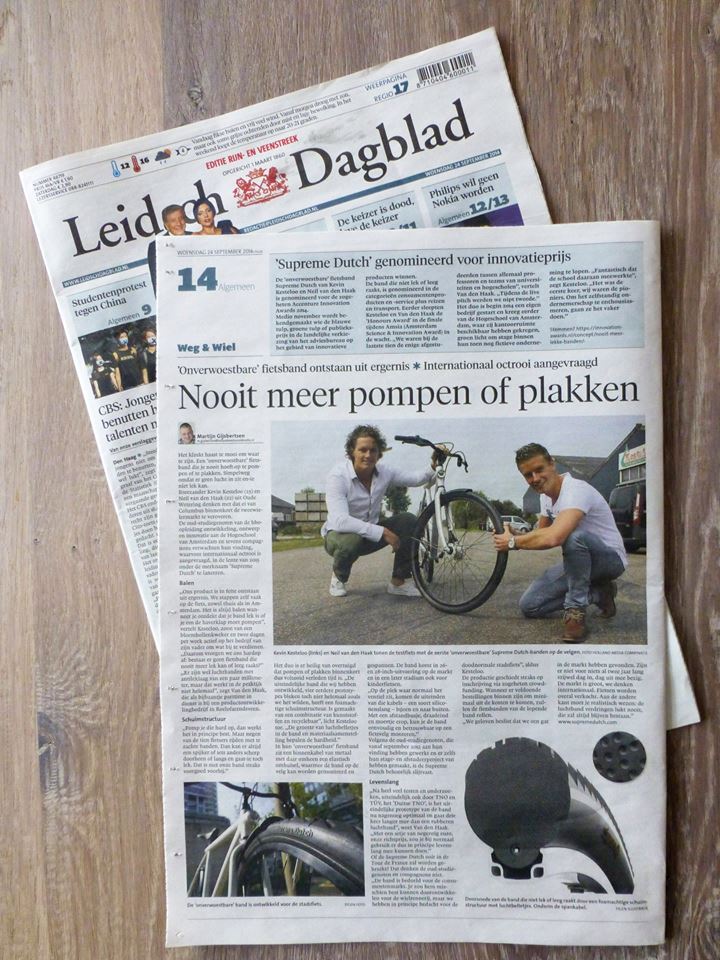 It sounds almost too good to be true. An ‘indestructible’ tire that you never need to pump or stick again. Simply because there is no air in -and he can not leak.

Kesteloo Kevin (25) and Neil van den Haak (22) thinking that they soon will conquer the bicycle tire market with their new invention.

Greaduated from the study, Engineering design and innovation at the University of Amsterdam. Expect their invention, which international patent is pending. Will be launched in the spring of 2015 under the brand name ‘Supreme Dutch’.

,, Our product is in fact born out of our own annoyance. We cycle a lot, both at home and in Amsterdam. It’s always is annoying  when you discover that your tire is flat or you have to pump up your tire, ‘says Kesteloo son of a bulb grower and two days a week working in the company of his father to earn some extra money. ,, We wondered if their was a tire that will never go flat or leak”?

,, There are some tires with anti-leakage layer of a few millimeters, but it is not 100% puncture proof, ” said Van den Haak, whose side job is part-time for a product development company in Roelofarendsveen (near Amsterdam).

If you have the right air pressure, then it basically works. But nine out of ten cyclists riding with to soft tires. Then there is always a chance a nail or other sharp object goes through and will give you a flat tire. With our tire is this problem soon gone for good. ”

The duo is convinced that pumps and repair kits are shortly tools of is the past. ,, The final tire we have developed, four previous prototypes still were not quite as we wanted it, has a closed cell foam structure. Is made from a combination of polymers and is recyclable ”, Kesteloo explains. ,, The size of air bubbles in the tire and the combination of the polymers determine the hardness. “”

In their “indestructible ‘bicycle tire is an inner cable of metal covered with a resilient covering, with which the tire can be mounted on the rim and tensioned. The tire comes in 26- and 28-inch version on the market and at a later stage for children’s bicycles.

,, The position where the valve hole is located, will come out the ends of the cables, serrounded with a kind of silicone tube. With a spacer, stud and nut, you can mount the tire easily and reliable on a bicycle rim. ”

According to the former classmates, who have worked on their invention since September 2012 and even made their internship and graduation of it, the Supreme Dutch tire is pretty durable.

,, After a lot of testing and research, ultimately by TNO and TÜV, the ‘German TNO’, the final prototype of the tire is now almost optimized and lasts three times longer than a rubber tire, ” says Van den Haak. ,, With a set of ninety euro, our target price, they would in normal use last a life time. ”

Whether the Supreme Dutch ever in the Tour de France will be used? That does not think the former classmates and associates.

,, The tire is intended for the consumer market. You could perhaps develop a tire for the Tour de France, but we basically have developed the tire for the urban city bike, ” says Kesteloo.

Production takes place later on registration through so-called crowdfunding. When the right amound of orders are received and the costs will be covered, the tires will roll off the assembly line.

,, We certainly believe that we have found a gap in the market. We are not for nothing working for two years almost day in and day out. The market is large, we think internationally. Bicycles are sold everywhere. On the other hand you should be realistic: The air tire will never be displaced, that will always exist. ”

DISCOVER THE INDESTRUCTIBLE BICYCLE TIRE
NO AIR = NO MORE FLATS

DISCOVER THE INDESTRUCTIBLE BICYCLE TIRE
NO AIR = NO MORE FLATS

Any cookies that may not be particularly necessary for the website to function and is used specifically to collect user personal data via analytics, ads, other embedded contents are termed as non-necessary cookies. It is mandatory to procure user consent prior to running these cookies on your website.